By R.T.Crowley, curator of history

NHVRy History: 1900-1983
For more than 100 years, the New Hope Valley Railway (NHVRy) has carried passengers and freight on its tracks. Originally built in 1904, the NHVRy first carried timber. As the land opened up to more farming, it carried agricultural products such as cotton, corn and, tobacco. Passengers were accommodated on a single mixed train, connecting with the Seaboard Air Line Railroad at Bonsal and other rail lines across the state at Durham.

Founded by William Roscoe Bonsal, Samuel Bauersfeld, and Henry Armand London, the tracks first ran from Bonsal, located 30 minutes southeast of Raleigh in Wake County, north through the valley of New Hope Creek (now Jordan Lake) to West End (now Carrboro). It was originally designed to connect with the University Railroad to form a bridge route for freight to bypass Durham and Raleigh.

Within a year of incorporation, the owners determined it would be more profitable to run to Durham instead, and chartered a new railroad in 1905 called the Durham & South Carolina Railroad (D&SC). All of NHVRy’s land and assets were sold to the D&SC.

The primary traffic on the line was lumber cut from the ‘New Hope Valley’ and as the land cleared, hauling farm crops became a major source of revenue for the railroad. The D&SC was never a major railroad but an extension of its line beyond Bonsal to the south ended at Duncan in southern Wake County and connected to the original Norfolk Southern Railroad (NS). 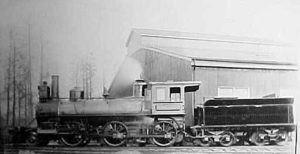 Ten-Wheeler Locomotive (4-6-0) built in 1905 by the Baldwin Locomotive Works in Philadelphia for the D&SC.

Southern Railway (SOU), one of the largest railroad systems at the time in the South, acquired NS and the line continued to operate until 1974, when New Hope Valley was flooded to create Jordan Lake.

A 1945 hurricane flooded Fayetteville and Wilmington and led to the creation of the Jordan Lake Flood Control Project by the US Army Corps of Engineers. It was planned for the lake to flood New Hope Valley and subsequently flood the line’s railroad tracks, so the Corps built a bypass line around the east side of what would eventually become the lake. This new line served as a route for construction materials used to build the Shearon Harris Nuclear Plant.

After the completion of the nuclear plant, SOU abandoned the railroad with plans to remove the tracks. Fortunately, the valley and the railroad were given new hope in 1983 when the East Carolina Chapter of the National Railway Historical Society approached SOU to purchase the rail yard and part of its line, approximately four and a half miles of track from Bonsal to New Hill. The rest of the unpurchased line from New Hill to Durham became the American Tobacco Trail and the part of the line to the south became the current rail access into the Shearon Harris Nuclear Plant. The remaining right-of-way was abandoned and the track removed.

In 1983, the East Carolina Chapter of the National Railway Historical Society renamed the rail yard and the four and a half miles of track it purchased from Southern Railway back to its original name, the New Hope Valley Railway (NHVRy). It also earned the nickname of The Lightnin’ Bug Route because when volunteers worked into the evening hours, they noticed hundreds of fireflies lighting up the area.

The nonprofit group first began its volunteer-operated train rides in the spring of 1984 with a somewhat sporadic schedule. In the early 2000s, the East Carolina Chapter NRHS became the North Carolina Railway Museum (NCRM). The museum became the parent company and current operator of NHVRy.

NCRM facilities include an outdoor exhibit of historic and heritage railroad equipment dating back to the 1920s, two steam locomotives, more than a half-dozen diesel engines, covered open-air excursion cars for passengers, a working garden railroad (G Scale), and numerous artifacts of North Carolina railroad history. Part of the museum’s educational mission, is to design the rail yard in a way showing visitors what a typical short line railroad looked like in the southern United States in the 1950s.

Today, the Triangle’s Train chugs along its historic track through the piney woods and over a trestle on an hour-long round trip from Bonsal to New Hill and back to the Bonsal depot. In addition to riding the train, now event ride days often include food, drinks, music, and other entertainment for families, children and railroad enthusiasts. One-hundred percent of the ticket fare goes directly into the museum (ticket fare does not include applicable taxes and fees which are additional and do not go to the museum).

Some of NCRM’s future plans include constructing additional buildings to house railroad equipment and artifacts, and to continue to offer educational opportunities to passengers. For more than 30 years, NHVRy volunteers have provided a memorable experience to those visiting the rail yard. As an educational nonprofit, we hope to continue to share our love and knowledge of trains with future generations.