The Goldston Depot served the community of Goldston until 1973. It was saved from demolition in the mid-70s by Jerry Gaines, who moved it a few blocks away and used it for storage. In November 2015, the train depot was gifted to the North Carolina Railway Museum by Jerry’s son, Todd Gaines. See photos and read more about the Goldston Depot here. 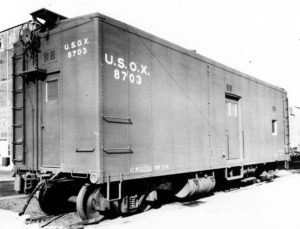 USOX 8707 was originally built at the St. Louis Car Company plant in St. Louis, MO in December 1942. The original interior configuration was as a Kitchen Car for WWII troop trains, providing meals to military personnel being transported to the bases and ports throughout the United States for duty or further deployment.

As one looks at the car from the side as depicted, the stoves inside were to the left where no windows exist, with food preparation areas on the other side of the car opposite the stove. The area to the right, now housing the gift shop area, held bunks and lockers for the cooks operating the car. The end doors allowed personnel to pass to and from the kitchen car as the troop train moved. The “USOX” reporting marks indicate the car was operated by the United Service Organization (USO) with the “X” identifying it as a privately owned car, one not owned by any actual railroad.

In 1946 the 8707 was retired from troop train service, and stored by the US Army. Eventually, the car was transferred to the US Army Transportation Corps at Ft. Eustis, VA, the stoves and most other interior fittings were removed and the car conversion to a Tool Car for maintenance trains. 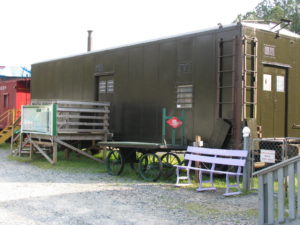 In the late-1970s car 8707 was donated to the Old North State Chapter NRHS (ONS), and moved to the Alexander Railroad for storage, pending the ONS acquisition of their own track. In approximately 1986, the ONS determined they could no longer justify continued ownership of the car, donated it to the East Carolina NRHS (predecessor of the NCRM), and the car moved to Bonsal. The car was in reasonable condition upon arrival in Bonsal, even still containing some of the original bunks from its military service. It was donated by the Old North State Chapter NRHS. 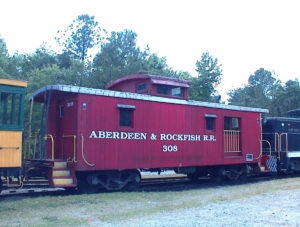 Type: Caboose – Builder: Magor Car Company – Built: Aug 1926
This car was originally built for the Seaboard Air Line Railroad as their #5320, and later purchased by the Aberdeen & Rockfish Railroad. The A&R cut the baggage doors to allow the car to be used on mixed trains for less-than-carload service. It was donated to the NCRM by the A&R.

Type: Caboose – Builder: NS Shops at New Bern, NC – Built: 1913
The oldest piece of equipment in the museum, this Norfolk Southern Railroad wood sided caboose is over one-hundred years old. It is used at the NCRM for birthday parties and meetings. It was donated to the community of Nelson, NC and used as a daycare center playhouse. It was acquired by the NCRM when it became unsafe to play in and was going to be burned. The NCRM subsequently repaired and restored it into its present condition, statically hosting birthday parties and small gatherings.

This heavyweight dutifully served the Southern Railway system for many years. It was donated to the East Carolina Chapter NRHS by Southern in the 70s. The car has been painstakingly restored and is open as an exhibit during operating days to the public. Builder: Bethlehem Steel. Built: 1922. 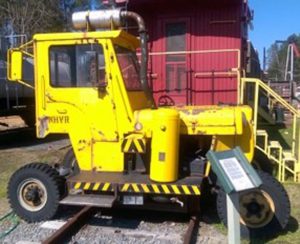 Type: Car Mover – Builder: Whiting Corp. – Built: 1959
This unit is capable of operating on both rail and road. Units like this were used at industrial sites for moving individual cars. It was purchased by the NCRM from the USMC at Cherry Point, NC. 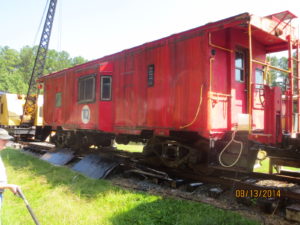 Type: Bay Window Caboose
This car was originally built for the Nickle Plate Railroad and transferred to the N&W in a merger. It was acquired by Carolina Power and Light and used as a storage building at the Cape Fear Power Plant. It was donated to the NCRM by CP&L. 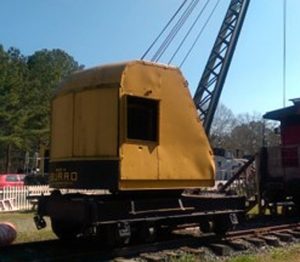 Type: Burro Crane Model 15 – Builder: Cullen Friestedt Co.
This is a typical small crane on railroad wheels used by Maintenance-of-Way departments across the nation. It was donated to NCRM by the Aberdeen & Rockfish Railroad. 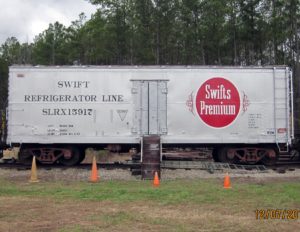 Type: Refrigerator Car – Built: Nov 1956
This car was originally owned by Swift Refrigerator Line and used for the transport of fresh meats and other refrigerated goods around the nation. A paint scheme like this, with the big corporate logo, is known as “billboarding,” and is no longer allowed. It was donated by a hot dog factory in Selma, NC.

Builder: GE – Built: Mar 1945 – Builder’s Number: 27994
Typical of locomotives sold to small railroads and industries across North America; an example of a very successful locomotive family. Never a candidate for most beautiful locomotive, nor the fastest, these GE center-cabs were popular due to their rugged construction and pure utilitarian design. Donated by Becker Sand and Gravel Company. Originally US Navy Port Chicago, CA, US Navy (Marine Corps assignment) Camp Lejeune, NC. 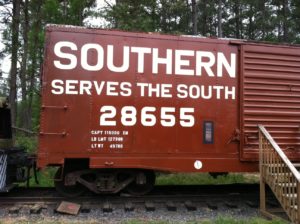 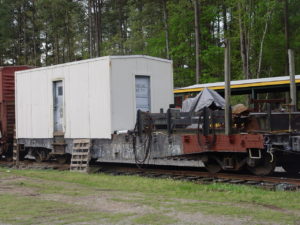