From the Brass Hat
by Chris Tilley

This ride season has begun with a flurry of activity and set a new record in the process!  Our BEST opening month ever.  The Hop into Spring rides were well attended and the place was really looking sharp thanks to a lot of hard work on your part.  We also had good turnout for the Brew and Choo and even a short-notice charter for the Norfolk Southern Historical Society.  Of course, a lot of work went into getting the equipment ready for the new season as well.  All in all, we have had a great effort from our members and I thank you!

In addition to all of the above, we have also been finalizing the plans and preparing to execute the Save the 10 car deliveries.  As you will see elsewhere in this issue, the entire area where we load the trains will have to be cleared.  Platforms, fences, electrical infrastructure and even the telephone poles must be moved, stored and later reinstalled.  We will be calling for a lot of volunteer help to get this accomplished on time, so the moves can happen starting on/about 9 May.  Please answer the individual crew calls if at all possible.

Thanks to everyone who kept everything on track while I was out of the area for the past couple of months.  Time for me to get back into the swing of things.  See you soon.

Save the 10 Update
by Victor Varney

Save the 10 delivery is nearly upon us!  The final rides before the delivery window have occurred and the 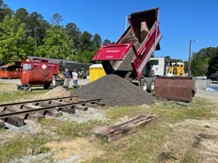 movement of obstacles has begun in earnest.

The Wednesday Crew and others have been working really hard to move platforms, electrical equipment and all of the fencing clear of the delivery area.  Here, the Wednesday Crew is shown removing the steps from the loading platforms and moving them.  The reader may also notice the absence of fences in this scene.  They have all been tagged, mapped, removed and stacked neatly for re-installation in the not too distant future.  Also missing are all the canopies, which have been relocated.  Several truck loads of gravel have also been delivered, which will now require some back-breaking work to spread and tamped properly.

The actual movement dates have moved one week later, currently scheduled for the week of 9 May 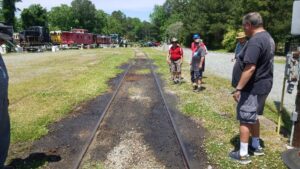 2022.  We now expect the crane to set up at Shearon Harris on Monday May 9, and the 10 cars will start moving the following day. This has already forced us to cancel our train rides on Sunday May 15.

Our rail car moving contractor is currently working to ready a new trailer to allow roll-on/roll-off (RORO) loading for the 4 flatcars which should speed things up considerably.  It is not yet known if this trailer will be ready in time for our moves.  The two cabooses must still be lifted off their trucks and the bodies transported on a flatbed trailer.  The three passenger cars and 60 ft box car will all be lifted off their trucks and set on rubber-tired dollies for transport.

There will be a lot of heavy equipment moving around the yard and occupying most of the infield, so there will not be a lot of room for casual observers.  That said, we do need some volunteers on site at Shearon Harris, along the move route, and at the NCRM to take pictures and videos of this entire operation. Jimmy Summerell already plans to set up for photography with his drone at the NCRM. IF there are others that would like to volunteer to be on the photo/video crew, please contact Victor Varney. We need folks with high quality equipment (not simply a smart phone) to create content that we can assemble into a story about this move.  Further guidance and volunteer calls will be going out shortly after this newsletter is posted.

Back in the “Old Days”
by Victor Varney 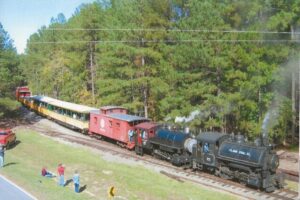 locomotives pulling trains on the New Hope Valley Railway.  Twice.  These events were known as Double Header Thunder.  You may see some older members with shirts commemorating these events.

This picture shows both locos pulling a train into Bonsal. Do note in the consist there are two cabooses and only three excursion cars, one is still without a roof.

This mighty consist included our well known #17, and Flagg Coal Company #75.  Interestingly, both locomotives were built by the Vulcan Iron Works in Pennsylvania. #75 in 1929, and #17 in 1941.  For many years #75 has been offered by its owner to run on different historic railroads, the New Hope Valley Railway being one of these. 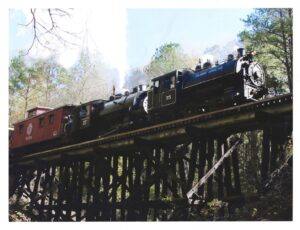 [Editor’s note:  I would like this column to become a regular part of the Tarheel Telegrapher.  If you have more photos or other info about the Double Header Thunder events at the NCRM, please submit an article to the Telegrapher or contact your acting editor.   You can also submit your own “Back in the Old Days…” article with pictures about anything (within reason) from our past for the Telegrapher, too.  If you can rough out the ideas, we can work with you to turn it into an article to benefit the entire membership. – CT]

The next new member orientation session will be offered on Saturday June 11 from 10 am to noon. It will be held under the covered area behind the yard office, and include a tour of the property along with some of our ongoing projects.

The new member orientation session is intended to give new members information about our history, bylaws, how to get information, who’s who, and most importantly how to get involved as a volunteer (and have fun). This session is open to those who have been members for up to 2 years. This is not a substitute for the rules and safety training sessions necessary to get involved with train operations, but we will explain how to attend those sessions, too.

If you are interested in attending, please RSVP to either Dennis Winchell or Victor Varney

We have a new Curator of History and Museum Committee Chairperson!  Long-time member Tim Carroll has been appointed to oversee all aspects of the museum side of the NCRM.  He had been working with the members of the Museum Committee for years and has managed to acquire some really old, really important documents and items over the years.

Over the past few weeks, we have contracted for a nice size climate-controlled storage space (on the second floor in case of flooding) not far from the yard.  For many years, portions of NCRM’s records, important documents, photos, maps, and railroad history artifacts have been scattered in various boxes or cubbyholes in the yard office, ticket office, birthday caboose, depot, storage containers, etc.

This is not good given the temperature extremes and humidity these items have been exposed to over many years. Some of these materials have also been kept at well-meaning members’ (and former members’) homes for safe keeping.

In many cases these items were donations to the NCRM (or the East Carolina Chapter of the NRHS as we were originally known), and need to be held in constant conditions for longevity.  A number of containers of documents, records and the like were moved to the storage space from several locations by some of our members recently.  We need to gather a lot more of the historical records, documents and photos to our centralized location.

One of our members, Anita Hussey, has volunteered to start curating the newly gathered materials with priority focus on all the documents, records, photos and other paper-based items. We are installing shelving as we go.  Anita has been going thru box after box listing the items within. Already a number of important items and real gems have been found.  For example, the original legal documents for the formation of the New Hope Valley Railroad in 1904, and the subsequent merger to form the Durham & South Carolina Railroad in 1905. We aim to get these and other NCRM historically relevant documents, photos, etc. digitized so they can be viewed on our website.

If you have any property of the NCRM, NHVRY, ECC NRHS, or anything related to the history of our rail line or our volunteers, please contact Chris Tilley for further instructions.  We are NOT asking for videos, photos, railroad books or magazines (unless specifically related to NCRM history).  Also, if anyone has one or two really solid used 4-drawer file cabinets they would like to donate, we could put them to good use in our storage unit.

Order of the Rusty Spike

We are pleased to announce that the NCRM Board of Directors has bestowed the Order of the Rusty Spike upon Cindy Grau (Gift Shop), Kevin Edwards (Car Brakeman) and Bob Roule (Car Brakeman/onboard announcer, Save the 10 Fundraising Chair).  The accomplishments and dedication of these fine volunteers were exceptional. 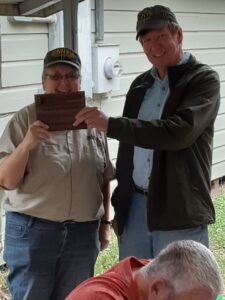 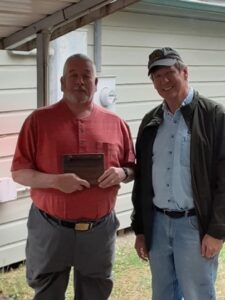 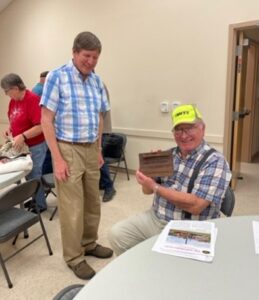 One of our Daisey Street Crossing signals was struck by a vehicle recently and ripped out of the ground.  If you have any information on this hit and run accident, please let us know.  A new footing was installed and the signal returned to the required location.  Special thanks to the members involved in getting this critical item back in working order.

Around the Rail Yard 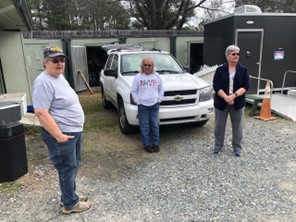 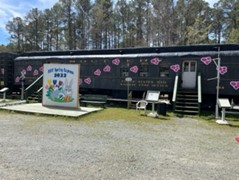 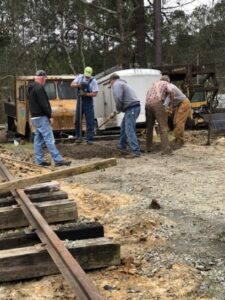 Received just before this newsletter was published: A photo of the newest section of track on the NHV.  Jim Meade admires the handiwork. This is the same track with the large pile of gravel shown a few pages (and a few days) earlier. Don’t worry, wheel stops for the end of track have been ordered.  The steam boxcar is spotted here and locomotive 17 will be moved shortly. 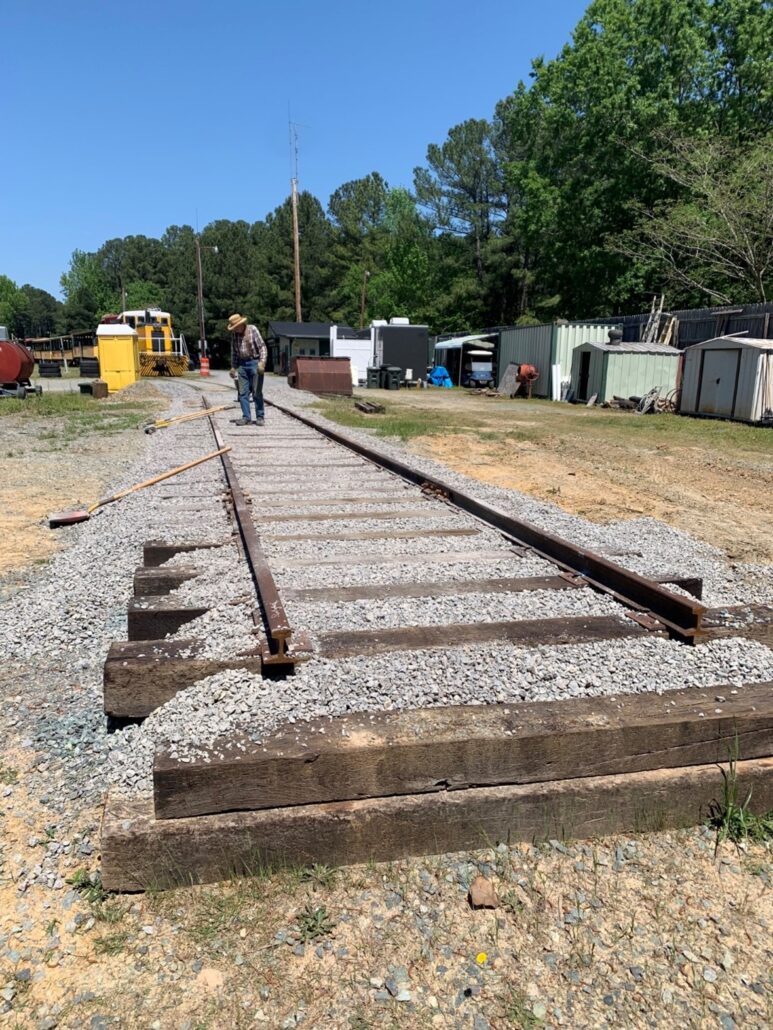