The Goldston Depot is one of our restoration projects with the greatest priority. Please consider making a contribution to the North Carolina Railway Museum, home to the New Hope Valley Railway. We’ve made good progress, but we’re not there yet!

And thanks to all our past supporters for the funds to move the Goldston Depot here in 2017!

The Goldston Depot was constructed for the Cape Fear and Yadkin Valley Railway around 1884. It was located in Goldston, Chatham County, North Carolina. The town was originally called Corinth, but was renamed after the first town mayor and land donor for the depot. The town received a post office in 1889 and in 1896 had a population of 150 people. 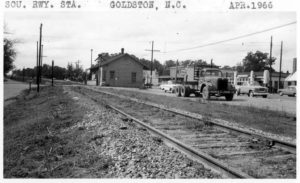 Goldston depot after passenger area removed but before first move.

Originally constructed as a freight only depot, the depot was enlarged in the early 1900’s to add a freight office, the addition increased the size to 23’ x 58’. Southern Railway took over operation of the line in 1909. In the mid 1920’s, as passenger service was added to the line, a passenger section was added increasing the overall size to 23’ x 72’. Passenger service was ended in the late 1930’s and the passenger section was removed with the depot converted back to being a freight depot with an office. Rail service at the depot was discontinued in the mid 1950’s and it was moved offsite before 1970 by a local businessman [Mr. Gaines] to preserve it from being destroyed. In 2015, the family of this local businessman contacted our organization about preserving the historical Depot. 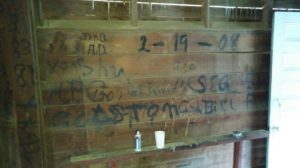 Handwritten dates by depot & railroad workers, and townspeople dating back to early 1900’s.

In August of 2017, NHVRy coordinated the move of the depot to the railroad yard in Bonsal – the following photos show the work on-site that has been completed so far. 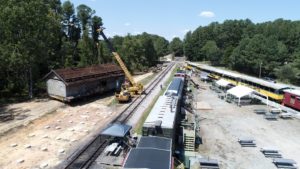 Depot being moved to new concrete footers alongside the mainline. 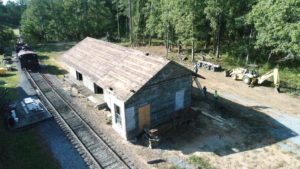 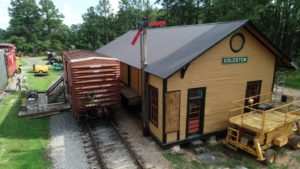 Fresh paint and metal roofing, along with the restored semaphore.