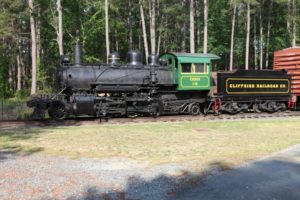 Cliffside #110 at Bonsal after cosmetic restoration.

Cliffside #110 was built for a logging railroad tied to McRae Lumber and Manufacturing Company in Quincy, FL (now part of Rex Lumber Co) and worked for them from 1927 until 1930. #110 was sold in 1963 to Echo Valley Park in Cleveland, S.C. and ran on the amusement park’s “Swamp Rabbit RR”. Then the locomotive was sold to Stone Mountain Scenic Railroad in 1969. Being the smallest and slowest steam locomotive at Stone Mountain, it saw little use at the park. In 2012, the Stone Mountain Memorial Association donated the #110 to the North Carolina Railway Museum. In February 2013, #110 was moved from her display location to Stone Mountain RR Shops for transport to Bonsal, N.C. Builder: Vulcan Iron Works. Built: July 1927. Type 2-6-2. Builder’s Number: 3739. Status: Restoration. Read more about Cliffside #110. 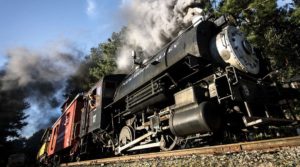 Steam Engine #17 carries its fuel and water supplies on board, not in a separate tender. Most of this type of locomotives were used in industrial or railroad switching service due to their small size. Builder: Vulcan Iron Works. Built: April 1941. Type: 0-4-0. Builder’s Number: 4309. Status: Out-of-service for mandated, 15-year, Federal Railroad Administration inspection.

70: This locomotive is similar in appearance to the GE center-cabs with some design elements common to industrial locomotives of its era. This locomotive has only one traction motor per truck and uses side rods to transfer power to the other side. Builder: Whitcomb. Type: 45-ton Diesel Electric. Built: April 1941. Builder’s Number: 60298. Status: Non-Operational.

10: This GE end-cab is an example of a very small, no-frills locomotive design used by many industrial and short line railroads. The smallest of the NHVR locomotives, it has only one powered axle (traction motor), and uses a chain-drive to transmit power to the other axle. Builder: General Electric. Type: 25-ton Diesel Electric. Built: April 1950. Builder’s Number: 30590. Status: Non-operational. Read more about #10.