As a new operating railroad museum back in the early 1980s, what do you use to carry passengers? Most would say, “Passenger cars, of course!” Good answer but suppose the organization does not have the funds to acquire such equipment. That was the situation at Bonsal back then. Casting about, however, the group found two flatcars were available and within the meager budget. 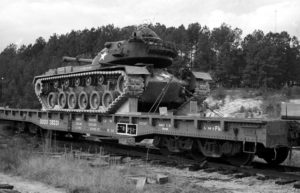 These cars had been constructed for the US Marine Corps during the 1940s and were designed to carry Sherman tanks. That pedigree meant the cars would certainly be able to carry a full load of passengers. The cars were located at Cherry Point, N.C., so transporting them to Bonsal was relatively inexpensive. They were acquired, and subsequently numbered 100 and 101, the car numbers they still carry today. 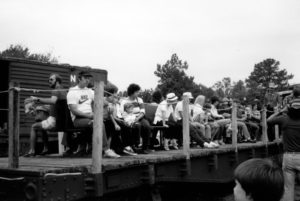 During the first operations, these cars did not carry the superstructures and seats they do now. As shown, a “railing,” of sorts, was placed around the edges of the decks, and passengers often brought lawn chairs to use as they rode. Obviously this was not the best situation, so the group decided some sort of safer enclosure was necessary. Then member Jack Landcaster designed a “body” without seats or roof, and the trains operated that way until one fateful day. 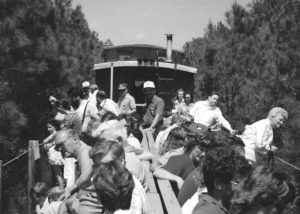 The sun was shining nicely at Bonsal when the train departed, but by the time it reached New Hill, rain was bucketing down, and with no roof and very few umbrellas, everyone was soaked through by the time the train returned to Bonsal. One of the passengers that day was a Wake County Commissioner, and he questioned why the cars had no roofs. He was informed roofs cost money the organization did not have. Some further discussions resulted in him arranging for some matching funds from the Wake County Recreation Budget. These funds provided the materials as a match to the labor of our volunteers. 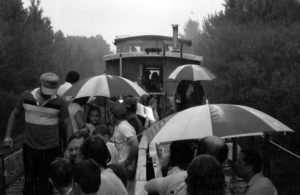 Seating had also been an issue since the days of railings and lawn chairs. When the first bodies were constructed on the cars some wooden benches were also built. A year or so later one of our members located some sheet metal benches large enough to run down the middle of the cars, mounting two benches back-to-back. These were far from ideal. They were hard, uncomfortable, and without roofs. The Carolina sun turned them into something akin to a griddle! With the advent of roofs, someone had the bright idea of using surplus seating from school buses, and that has been our standard seating ever since. 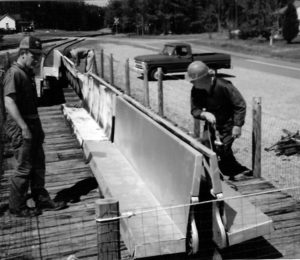 Some years later we decided to acquire some additional flat cars. Consulting the Federal Surplus lists showed several dozen flat cars were available at Camp Lejeune. These were originally identical to the 100 series and had been built around 1950. After the Korean Conflict, the DOD rebuilt nearly all existing flat cars, extending the length from 50 to 60 feet and replacing the four wheel friction bearing trucks with six wheel roller bearing Buckeye trucks with three articulated side plates per side.

One of our members met the chief car inspector of the Southern Railway at Camp Lejeune and picked out the three best cars. The cars were labeled NHVX and the paperwork was prepared. Shortly thereafter Amtrak demanded the entire batch for MOW service and re-lettered every car for Amtrak including ours. However, the base surplus officer decided we had already been awarded the three cars and Amtrak decided not to make an issue of it. The cars were shipped to Fuquay-Varina, but because they had been marked for Amtrak, they sat there for a few months. Eventually we received permission to store them at the Shearon Harris Generating Plant, and Southern moved them to the CP&L Steam Plant at Moncure. Then the CP&L Steam Plant switcher moved them to the CSX coal receiving yard and the CSX Apex local brought them to the Shearon Harris Generating Plant.

In March of 2006, the decision was made to bring these cars to our facility in Bonsal. The CP&L plant switcher moved them as close as they could to a side road off Bonsal Road where we picked them up. The cars were hauled by truck for the very short trip from there to Bonsal Yard. Over the following year or so, the new superstructures, mostly designed by our Dave Chasco, were constructed. These cars became our numbers 200 and 201.

Think about this heritage the next time you are at Bonsal as a crewmember or a passenger. These cars, originally built for war, now handle our passengers on many happy rides up and down our line. They serve us very well.