COL Chris Tilley: Dedicated to a Lifetime of Military and Nonprofit Service

From parachuting out of airplanes to scuba diving in the Florida Keys, Colonel Chris Tilley has had many adventures. But the sixteen-year volunteer of The North Carolina Railway Museum (NCRM), home to New Hope Valley Railway, says operating a steam engine is the most exciting thing he’s ever done.

“Even more exhilarating than jumping out of planes,” says COL Tilley, who serves as president of the NCRM where the Triangle’s Train offers excursion rides on vintage equipment. 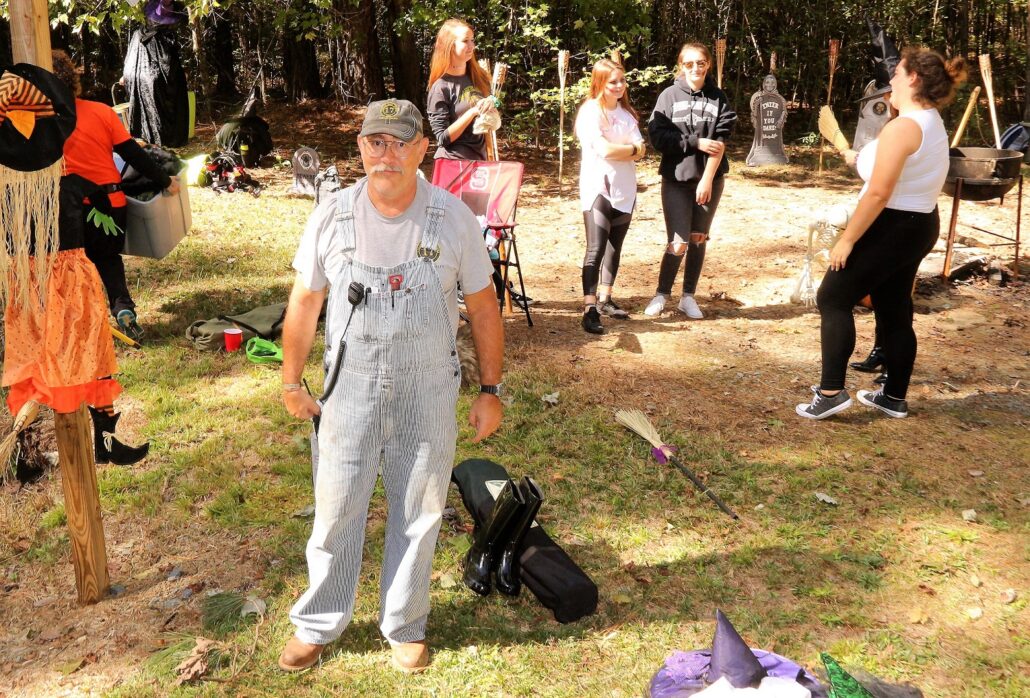 COL Chris Tilley with the witches, a popular scene that train riders view from the passenger cars during the Halloween Track or Treat event. His daughter Mikayla created the flying concept and member Scott Smith built the infrastructure. His wife Gina usually plays the flying witch.

In October, he is retiring from 37 years in the U.S. Army (active and reserve). He will remain in his full-time job in the civil service for a few more years– a career he’s had since 1993. His wife Gina will also retire in a few years from her job as a civil engineer with the State of North Carolina.

Retirement will allow more time to volunteer at the railway as well as travel with Gina in their retirement home on wheels–a large, fifth-wheel camper. He also wants to finish the book he’s writing on how to model freight train cars.

Chris was born in Atlanta, Georgia. He grew up near several railroad lines and often visited Stone Mountain Park with his family to enjoy the standard gauge railroad that circles the mountain’s perimeter.

At age six he got his first model railroad and has been hooked ever since—so much so that he has built a 24’ x 24’ building on his property to house his model train collection.

He graduated from high school and went to North Georgia College where it was required for all males to serve in the Reserve Officer Training Corps.

“Active duty military service wasn’t my initial plan, but I made it through college and received a commission in the Army,” COL Tilley explained. He was stationed in Germany and then at Ft. Bragg when he completed eight years of active duty. 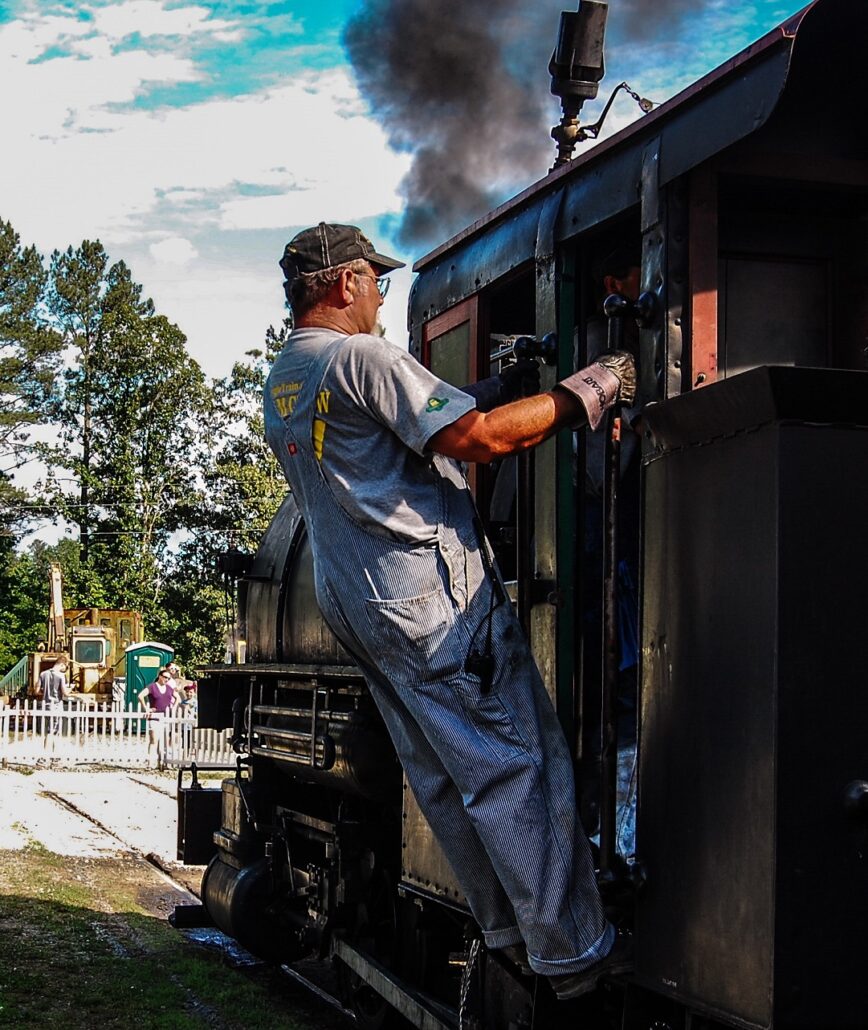 In addition to serving as President of The North Carolina Railway Museum and New Hope Valley Railway, COL Chris Tilley has volunteered his time to the educationally focused nonprofit as a car host, brakeman, conductor and temporary dispatcher. Here he’s pictured as the steam locomotive fireman.

Once out of active duty, he transferred to the Army Reserve and stayed there for 29 years, serving one weekend a month and two-to-three weeks a year in various places such as Homestead, Florida, after Hurricane Hugo to help rebuild.

His civil service career began 27 years ago. For many of those years, he was an administrator for his Army Reserve unit in Greensboro, N.C. and was responsible for personnel issues.

Chris and his family live in Pittsboro, not far from Lake Jordan where they like to go boating. They’re close enough to the New Hope Valley Railway to hear the steam engine whistle. While hanging holiday lights years ago, he heard the train whistle, tracked down where it was (pun intended) and has been a member and volunteer ever since.

He has two adult sons and college-age twins–daughter Mikayla Tilley and son Tilley Casselberry who are finishing school at the University of North Carolina-Charlotte. His family has joined him in the rail yard as volunteers helping with the Halloween and Santa train rides. Gina has been a flying witch and Frostie the Snowgal to entertain visitors.

He believes New Hope Valley Railway plays a vital role in keeping railroad history top-of-mind for today’s youth, as well as those who remember the era of steam engines.

Much of the historic railroad equipment at NCRM was on U.S. military bases before finding a home in the rail yard. All four of the railway’s passenger excursion cars were built from flat rail cars that were used to haul tanks and other heavy equipment from Camp Lejeune in Jacksonville, N.C., and the museum exhibit car and gift shop was originally a kitchen car for troop trains during World War II.

“Our educationally focused nonprofit brings together a diverse bunch of great volunteers who lend their skill sets and talents to keep the spirit of railroading alive for future generations,” said COL Tilley. “Our volunteers are our most important asset.” 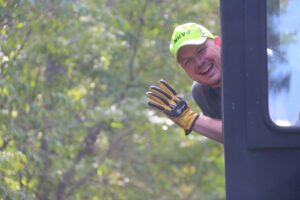 A volunteer since 2002 for the North Carolina Railway Museum, home of the New Hope Valley Railway (NHVR), Mike MacLean once held paying jobs with a mountain tourist railway and freight railroad company.

The NHVR museum and trains are 100 percent operated and maintained by volunteers. Mike and the many other volunteers who work there share a passion for trains and a dedication to preserve the local treasure known as the Triangle’s Train.

Like most of those who give up a significant amount of their free time to work in the rail yard, Mike’s love of trains dates to his childhood in the suburbs of Texas.

“We lived near a railroad. We couldn’t see the trains from where we lived, but whenever we heard them my father and I would jump in the pickup truck to go watch them pass by. He thought it was just a fad, but years later I’m still into trains,” explains Mike.

While a junior at NC State University, Mike found a weekend job that paid him for his love and knowledge of trains at a mountain tourist railroad. Perfect for the train lover, it was a 600-mile round trip from Raleigh to the railroad’s shop.

Mike was hired by the tourist railroad to be a car host. He soon went on to work in “every job they had.” He was a dishwasher on the dinner train, a crew leader, conductor and his longest held job as hostler. Mike explains that a hostler is best described in modern terms as “a night watchman.”

The term originates from the middle ages when people would ride a horse into town, stay at the inn and give their horse to the hostler who would groom it, feed it and put in the barn overnight before returning it to its owner the next morning. The term transferred to those who took care of iron horses so when the train crew arrived the engines would be ready to go.

“I’d leave the Triangle on Friday afternoon and arrive at the railroad shop in the evening. I’d wash the engine, clean the cab, fuel it, oil it, grease it and get it ready for its run the next day. I’d work until 6 a.m., stay at a hotel during the day or crash on a friend’s couch and do that same shift Saturday night then drive back to Raleigh on Sunday morning,” Mike says.

While a senior in college he got an IT internship with a company in Research Triangle Park and eventually hired on full time while continuing to work weekends at the railroad.

Mike’s train journey continued when he left his job in RTP in 2000 to take a job in Kansas with a major class 1 railroad. While he enjoyed the experience, he missed the South and moved back to the Triangle after a year and decided to look for train opportunities closer to home. That’s when he discovered New Hope Valley Railway in Bonsal—30 miles southwest of Raleigh and a much closer drive for Mike.

During the nearly 20 years he’s been a volunteer for the Triangle’s Train, Mike has served on the Board of Directors beginning in 2006, was Board President from 2012 – 2015, and is now head of the Steam department. His biggest task is leading the “Steam Team” that is repairing Steam Engine #17 that is currently out-of-service due to a mandated, 15-year, Federal Railroad Administration inspection.

Mike believes NHVR is the perfect venue to show and tell people the story of railroading.

“This is one of the few places where someone can get close to a steam engine,” Mike says. “We’re a unique venue where families can create memories riding a train and at the same time learn about an important mode of transportation that played a key role in American history.”

Mike now shares his love of trains with his own family—his very patient wife Amy and his two young daughters.