From the Brass Hat

Hello everyone.  Sorry this is late, but somehow I wound up catching COVID and losing connectivity to the internet before I could send it out to you.

July was just as busy as the previous months were, but that should come as no surprise.  In addition to well-attended ride days, a lot of other important events have happened.  The key event of the month was the initial meeting of the new Strategic Planning Committee.  Chairman Jim Jatko has put a lot of thought and effort into giving the group a good foundation upon which to base their deliberations toward charting our course for the future.  Some things we need to continue, some we need to modify to adapt to changing situations, and we need to begin doing some things that we have not done in the past.  We will also be working more closely with our local neighbors to make sure we are not planning in a vacuum.

A number of our members helped out with the continuing saga of truck/wheelset swaps ultimately designed to get car 101 roadworthy and back in the train in time for the Halloween trains.  Mike MacLean published a two-page list of swaps to make all this happen and even have the SCL Caboose almost ready to go in the process.  More to follow in a few pages…

Your help in these large tasks is greatly appreciated.  We have something to offer for everyone at the NCRM!

New Member Orientation Session
The next new member orientation session will be on Saturday September 17 from 10 am to noon. It will be held under the covered area behind the yard office followed by a tour of the property along with some of our ongoing projects.  The orientation session is intended to give new members information about our history, bylaws, how to get information, who’s who, and most importantly how to get involved as a volunteer (and have fun). This session is open to those who have been members for up to 2 years. This is not a substitute for the rules and safety training sessions necessary to get involved with train operations, but we will explain how to attend those sessions, too.  If you are interested in attending, please RSVP to either Dennis Winchell or Victor Varney.

Back in the “Old Days” – The Alexandria Story
As told by M. Gray Lackey

“This is the story of the Alexandria and its movement (or at least a great deal).  I can’t remember the date but if you look at the stencil on the car you will be close, mid to late 90s.  A member that worked with the Alexander Railroad Company (ARC) many years back found out that the railroad wanted to dispose of the passenger car currently known as the Alexandria.  The W.R. Bonsal Company was contacted (it was still a family business then) and asked if they would participate with the car to be renamed the W. R. Bonsal in honor of the namesake founder of the original New Hope Valley.  A verbal (bad idea) yes was stated and the process started.  Acquiring the car was no issue, but then came the problem of moving it.  Norfolk Southern (NS), ARC’s sole connection, initially said they would not move it due to it having solid bearing wheelsets.  It was pointed out that at the time they were moving solid bearing roadway service gondolas with both new and old ties in them every day and proof of that could be obtained if they desired such.  Norfolk Southern relented on movement under three conditions:  They would not move it on a mainline and we would have to give them a routing as such, the old U type brake valve had to be serviced and the car had to have new bearing lubrication pads installed – all signed off by a railcar maintenance company.  NS really didn’t think those conditions would be met.

First the routing had to be figured out and since the car is now at Bonsal it obviously was.  ARC from Taylorsville NC to the NS interchange in Statesville, NS from Statesville via local switcher to Old Spencer yard in Spencer, NS from Old Spencer yard to Halls Ferry Jct. (New London) via the Albemarle switcher,  NS from Halls Ferry Jct. to the Winston Salem Southbound (WSSB) interchange at Whitney,  WSSB from Whitney to the Aberdeen Carolina and Western (AC&W) (former old NS) interchange at Norwood through Star NC to the Carolina Power and Light (CP&L) Cape Fear power plant at Brickhaven, CP&L moved the car through the plant to CSX at Moncure where it was finally moved to CP&L Shearon Harris and taken into storage by the Shearon Harris plant switcher.  Now there will be a test on this routing later.

First step solved
Next the type U brake valve was removed and sent to Touchton Air Brake in Florida for service – no problem EXCEPT, the UPS trailer it was on was involved in a wreck and fire but luckily the valve was not damaged.

Second step solved
Lastly, a repack of all twelve bearings.  The company that was doing maintenance for NCDOT at the time helped out and did the sign offs.  It was winter and so cold in Taylorsville the day the bearings were repacked that I went to the local Family Dollar and bought a sweatshirt to attempt to keep warm – more to come.  It took most of the day to do twelve bearings.  I had asked earlier what type of oil to get so I could get it when I got the extra shirt – answer was the cheapest motor oil they had.  The oil had been sitting out several hours and when it was time to put it in, the oil was so cold and the wax content so high (remember I said cheap) that when the bottle was squeezed the oil came out semi-solidified just like hot plastic out of an extrusion die.  A good laugh was had by all that saw it and it was asked would it work, the answer was no problem as it wouldn’t take long to get some warmth and fully liquify once it started moving (it did).  Step three solved and in short time the car started its journey of which I have no idea how long that took – it wasn’t fast.

Third step solved
Remember the verbal part early on?  Well, when the W.R. Bonsal company was contacted that the car was here [at the Harris Nuclear Plant] and would need to be moved the final mile, the company claimed no knowledge and stated they were not interested.  [That is how the Alexandria wound up at the Shearon Harris Nuclear Plant until rescued in the Save the 10 campaign.]  As Paul Harvey used to say – And now you know the rest of the story.”

Editor’s note: If you have photos or other info about long-ago events at the NCRM, please contact your acting editor.   You can submit your own “Back in the Old Days…” article with pictures about anything (within reason) from our past for the Telegrapher.  If you can rough out the ideas, we can work with you to turn it into an article to benefit the entire membership. – CT

Museum Business – Links to Some Past NCRM Treasures
By Victor Varney
Here is a nice video that we found during curation of the 61 boxes in the storage unit. It was done by UNC TV sometime in 2005, likely in the spring or summer shortly after 399 arrived.

Here are some good trips down memory lane [from the Wednesday Crew website], and interesting to see some things never change…

We are sad to announce the passing of Cynthia Ezzell, wife of our long-time electrician, diesel mechanic and locomotive engineer Gene Ezzell, Jr.  on 22 July 2022 after a lengthy illness.  They were married 46 years.  She will be missed by many. 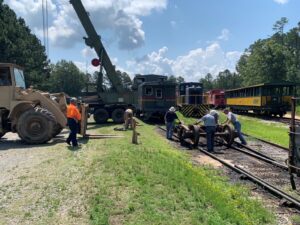 About a week ago, another installment of the Mike MacLean weightlifting and fitness program took place.  A newly repaired truck was swapped into the SCL caboose and the shop truck taken out as part of a sequence of replacements designed to get Excursion Car 101 back in the consist.

Of course, a lot of switching moves were required to get this set up, followed by lifting with our big crane and truck movement with the giant forklift.  Several more iterations are planned over the next few Saturdays.

If you want to learn and help, these sessions are great opportunities to do both.  It may seem like a huge task, but the satisfaction of a big job, well done, is immense! 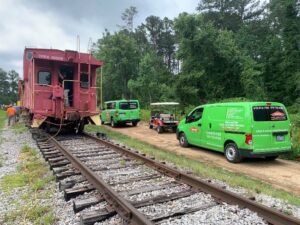 Over the course of three Work Wednesdays in July, ServPro was on site to thoroughly clean and sanitize our two Save the 10 cabooses (now 302 and 309), and our birthday caboose (335). 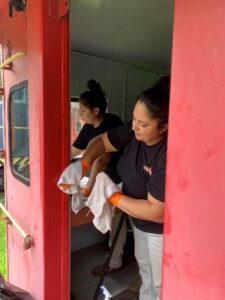 They were very intrigued by the thought of working on cabooses and quoted $4000 to clean all three but their GM decided to do the work for FREE if we can provide some promotion for them.

We will put up little signs inside each caboose, and a larger one on our newly refurbished sponsor board next to the ticket office.

This helps us toward getting 302 and 309 ready for revenue service in our trains starting this fall. And with the birthday caboose now cleaned we want to start offering it again for birthday parties as soon as we can assemble a couple volunteers to manage the parties. If you would like to help with the parties, contact Jim Whitten.

Torpedoes – Are We in the Navy or On a Railroad?
By Chris Tilley 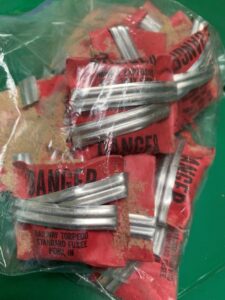 Occasionally you will hear the term torpedo mentioned, especially if you take the NHV Rules Test.  Most folks don’t even know what a torpedo is (outside of WWII movies about Naval warfare).  We aren’t talking about the kind launched from submarines.  A railroad torpedo is an emergency signaling device to warn oncoming trains of danger ahead.  They are attached to the top of the rail (with attached metal strips) on the engineer’s side, usually two, about a foot apart and another a few yards down the rail.

When the locomotive wheels hit the torpedo, each produces a loud explosion, guaranteed to get the engineer’s attention:  bang, bang… bang!  That means STOP immediately.  So, what’s the big deal?  Read on.

I mentioned loud explosion above.  These are indeed explosive devices.  As these devices age, the explosive charge within may begin to deteriorate, becoming more sensitive to external stimuli over time.  Even so much as a touch could cause unintended detonation and traumatic injuries to the unlucky individual.  The torpedoes pictured at left were found in one of OUR new cabooses and were carefully removed to a safe location for destruction.

Note the word DANGER in large text on each.  This is one reason we asked everyone to stay out of the new cars until the contents were examined carefully and any dangers mitigated.  The red portion is roughly the size of the top of a rail to give you an idea.  If you come across these at a swap meet or on a railroad, steer clear.  The best idea is to leave torpedoes to the brave submariners defending the seas.

If you do not receive crew calls, please contact the crew caller Chris Tilley if you are interested in participating!

Railroading in the Big Pines in the Old Days?
Actually, moving cars to the old line in early 2022. 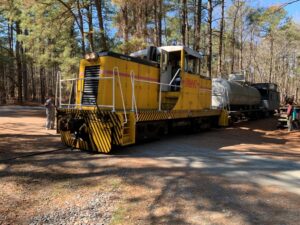 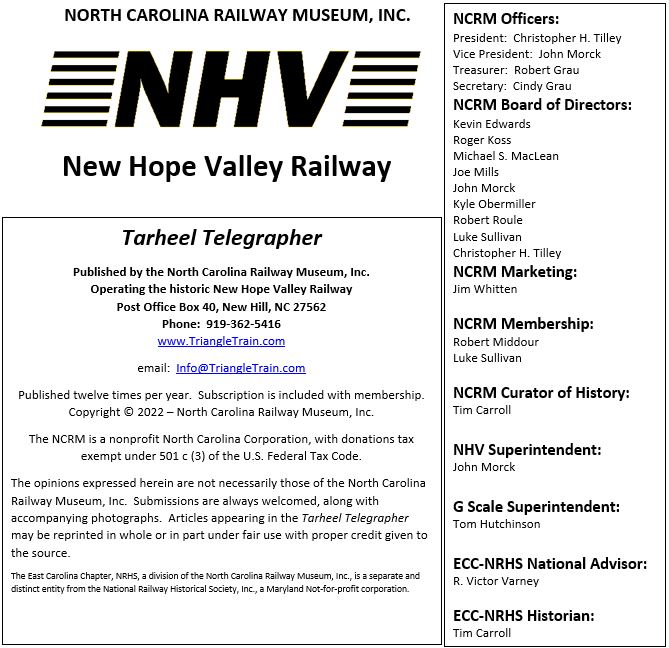