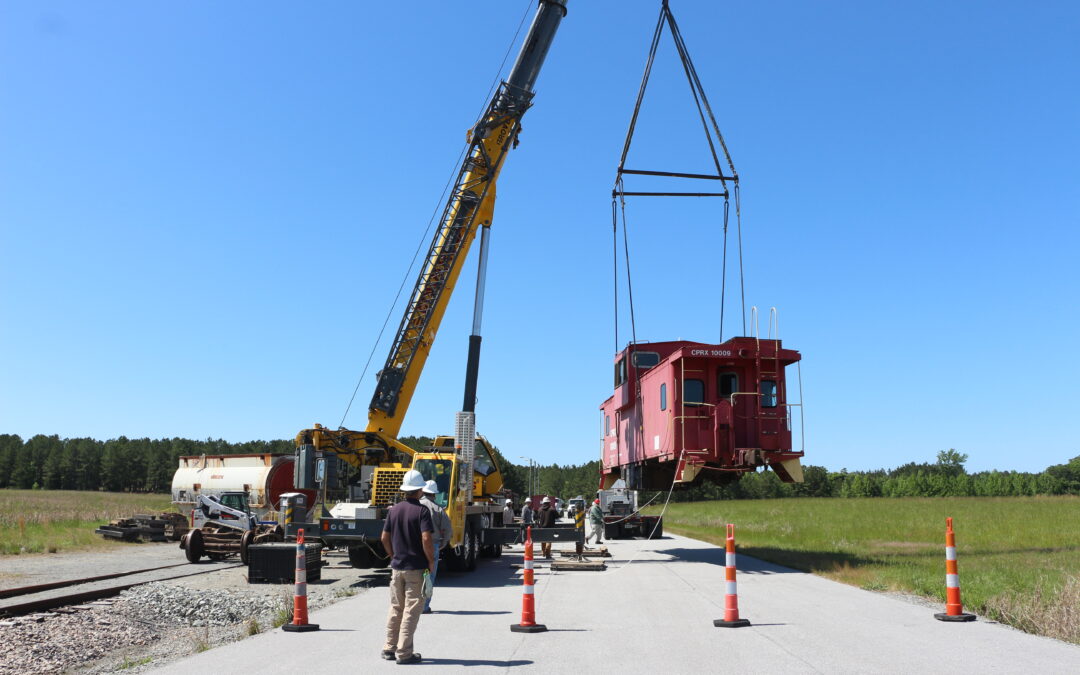 (BONSAL, N.C., May 10, 2022)—The North Carolina Railway Museum (NCRM) is moving ten historic railroad cars by crane and flatbed trailers over public roadways from a Duke Energy property to its rail yard five miles away.

The move of the train cars from the property of Duke Energy’s Harris Nuclear Plant to the rail yard of New Hope Valley Railway has been planned for a few years. Tightened security measures, Covid restrictions and fundraising efforts have postponed the move until recently.

Nearly $200,000 has been raised for the effort from volunteers and the public, including a $50,000 grant from the North Carolina legislature state budget.

NCRM is an educationally focused, all volunteer, non-profit organization with a mission to preserve and share North Carolina railroad history with the public. NHVR, also known as the “Triangle’s Train,” is an operating arm of the museum, offering visitors an opportunity to ride in passenger cars pulled by locomotives.

The move began on May 9 and will continue over the next week. The railcars are being lifted by a large crane onto flatbed trailers and road-going rubber tire dollies, travelling five miles down Old U.S. Highway 1 to the rail yard in Bonsal.

Once the 10 railcars reach their destination at New Hope Valley Railway, visitors will be able to view them. Volunteers will eventually restore them.

For more than 20 years, the historic cars have been parked at a disconnected railroad track on the Duke Energy property. Many of the cars are weathered and more than 100 years old. Some are the last surviving relics of their kind, but all in solid condition and salvageable.

“The roadblocks and logistics involved in transporting the railcars have been challenging but the move is finally happening, we’re bringing these cars home,” says Victor Varney, NCRM volunteer and project manager for Save the Ten—the name given to the effort.

“Saving these railcars and having them as part of our rolling stock will help us preserve and share North Carolina railroad history, which is our mission,” adds Varneyj.

Each of the 10 historic railcars all have their own place in history. Dating back to the early 1900s, four of the railcars were used for various functions such as cooking cars, sleeping cars, carrying baggage or transporting vehicles and equipment.

The other six railcars were used in the 1990s and 2000s to serve power plants in the Carolinas. These railcars, including two cabooses equipped with full living amenities and four flat cars, are being donated to NCRM by Duke Energy.

To learn more about Save the Ten and the move, visit https://www.triangletrain.com/save-the-ten/.